Before the game even begins, history is being made by the two Super Bowl cities representing the NFL this weekend.

Boston and Los Angeles happen to be the same cities represented in this year’s World Series between the Red Sox and Dodgers. And now the Patriots and Rams will go head to head in the Super Bowl.

I’m just putting this out there…but it’s obviously LA’s turn to take home the victory! Although I’m not technically a Rams fan, I’m a big Sean McVey fan (head coach of the Rams.) We went to high school together in Atlanta- which happens to be where the Super Bowl will take place.

Every year right around the Super Bowl I’ve done a post featuring the host city of the Super Bowl. However, this year’s post would be incredibly redundant as I’ve written about Atlanta a TON (it *might* be my favorite city to visit with my family!)

If you’re lucky enough to have scored tickets to the game, and you’re planning to make a weekend of it- check out these awesome things to do/see in Atlanta:

20 Things To Do In Atlanta 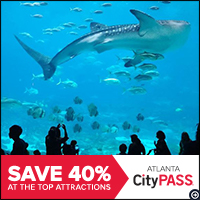 Despite the controversy, after two questionable endings in the conference championship games, I think everyone is looking forward to the Patriots/Rams matchup. I love this map of the predicted cheering “sides.”

The Patriots are New England’s team; however, their home turf (Gillette Stadium) is just outside of Boston. And, obviously the Boston Red Sox are also from that Super City! We are huge fans of Boston and the Red Sox…not so much the Patriots though.

The Bunker Hill Monument was my children’s favorite stop.

I highly recommend visiting Boston between late-spring to early-fall. There are tons of great outdoor experiences and we found Boston to be a wonderful city to walk. A few of our favorite activities in Boston:

Admittedly, I haven’t visited LA with my kids YET…but I can’t wait.

Funny memory about the last time I was in LA: Brent and I thought it would be fun to walk around Rodeo Drive for an afternoon. Traffic was really bad. Like insanely bad. But we chalked it up to being “typical” LA traffic. After literally being parked on the road for 2 hours we finally started moving and arrived at our destination. It was only then that we found out President Obama was in town and they actually had all the roads in the area closed!

When we do get the opportunity to visit LA as a family, here are the spots at the top of my list:

Who will you be cheering for this weekend, the Patriots or Rams?

You may also enjoy reading:

7 Places To See In Every State

The Best Way To Make Any Destination a Fun Family Adventure

*This post may contain affiliate links. By making a purchase after clicking through a link, Mom With A Map will receive compensation.